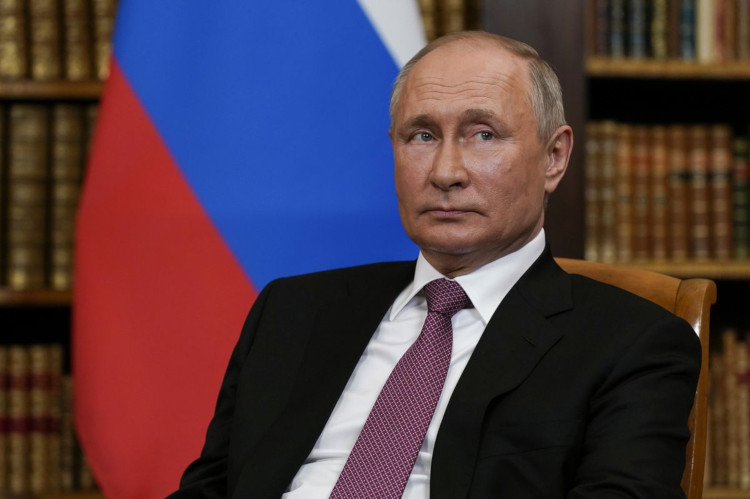 Yes, Russian President Vladimir Putin would make a good James Bond villain. He’s a former KGB agent whose opponents occasionally turn up dead. But his view that the U.S. is vilifying Russia, inflating the Russian “threat,” and acting aggressively toward his country is essentially correct. American politicians on both sides of the aisle are pushing us toward conflict with the country with the world’s second largest nuclear arsenal.

House Intelligence Committee Chair Adam Schiff, D-Calif., calls for President Joe Biden to draw “red lines” against Russia, which has sought to “remake the map of Europe.” In fact, it is the U.S. and our Western European allies who have “remade” the map of Europe, and broke our word in so doing.

Between 1989 and 1991, the Soviet Union let practically its entire empire go without a shot being fired — an action almost unprecedented in human history. It did so partly because of Western promises that our military alliance, the North Atlantic Treaty Organization, would not, in the words of then-U.S. Secretary of State James Baker, “move one inch eastward.” The long list of such assurances is detailed in declassified U.S., Soviet, German, British and French documents released in 2017.

When the prominent German magazine Der Spiegel examined these and interviewed those involved, they concluded, “there was no doubt that the West did everything it could to give the Soviets the impression that NATO membership was out of the question for countries like Poland, Hungary or Czechoslovakia,” members of the Soviets’ Warsaw Pact alliance.

Today, those three former Warsaw Pact countries and two others, in addition to three former Soviet republics and several formerly neutral countries, are members of NATO.

Now Ukraine, which has helped NATO in Afghanistan, Iraq, the Balkans, and the Mediterranean, and is a participant in NATO’s Defender-Europe 2021, is again moving toward joining NATO. This is in response to the Russia “threat,” allegedly evidenced by Russia’s 2014 takeover of the Crimean Peninsula.

The 2014 Ukrainian revolution overthrew a pro-Russian government in Kyiv and replaced it with a pro-Western one. Russia, already ringed with U.S. military bases in Afghanistan, the Persian Gulf and former Soviet Central Asian republics, as well as NATO bases stretching from the Black Sea to the Baltics, feared this might lead to a NATO naval base at Sevastopol in the Black Sea. Russia then seized Crimea and reincorporated it into Russia.

Despite the West’s angry reaction, the Kremlin claims Crimea is a part of Russia and has been since 1783. Russians there outnumber Ukrainians over 4-1.

Soviet premier Nikita Khrushchev transferred Crimea to Ukraine administratively in 1954, partially as a sop for Stalin’s horrific mistreatment of Ukraine. It was meaningless, as Ukraine and Russia were part of the USSR, whose demise nobody anticipated. But when the USSR collapsed and Russia was in chaos, Ukraine declared independence and took Crimea with it.

Soon there was a movement in Crimea to reunite with Russia, a movement repressed by the Ukrainian government. Putin is an amoral opportunist who certainly did not go into Crimea to help the Crimean people; however, most Crimeans did support a union with Russia and voted accordingly in an election held over Crimea’s new status.

Along roughly similar lines, after the 2014 revolution the Ukrainian government sought to de-Russify populations in Donetsk and Luhansk, together known as the Donbas, which lies along Ukraine’s border with Russia. Russian is the main language of 75% of residents in Donetsk and nearly 70% in Luhansk. A Russian separatist movement has grown there, supported by Russia.

Putin blames the U.S. for “the steps that deteriorated our relations,” explaining, “It was not us who introduced sanctions … We don’t have any issues with the U.S. … But (the U.S.) has an issue with us. It wants to contain our development.” He has a point.


Glenn Sacks is an educator who has traveled extensively in Russia and the former Soviet bloc.